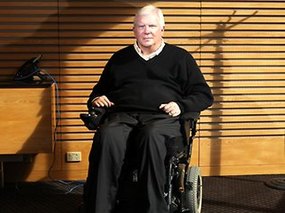 John’s story has been adapted from the Australian Weekend Magazine article' The Number Cruncher' by Sue O'Reilly, 6 August 2011

John Walsh was an 20-year-old rugby league player and a star maths and physics student at the University of Sydney with dreams of carving out a career in the United States as an Astrophysicist. His life changed forever one Saturday afternoon in July 1971 when he smashed into a poorly padded wooden goalpost in the heat of a game. This collision severely fractured his spine at the neck level. Not realising that he had a serious spinal injury John carried on and played again the following week. He reflects that no one realised the dangers of exacerbating a spinal injury back then. The next week John remembers that he ran on the field, fell over-and that was it! The collision resulted in high-level quadriplegia.

Initially, John thought that quadriplegia would destroy his academic and future career plans. John says university campuses weren't the least bit disability friendly in those days. There was no personal care support. His old school Christian Brothers Lewisham raised funds for home modifications and a wheelchair however he had difficulty taking notes in lectures and accessing the library. After obtaining his science degree John says he had to give up his studies for honours.

Sometime after John had a stroke of good luck. He explains it just happened that my neurosurgeon played squash with the senior partner from an Actuarial consulting firm and talked him into offering me a job, almost as a charitable gesture. John began work as a computer programmer, using sticks taped to his paralysed hands to laboriously code programs on to sheets of paper. He also started doing part-time Actuarial studies by correspondence, which usually took five years to complete but due to his physical limitations took John ten years.

An appearance on 'This Is Your Life' program led to John being asked to talk to Rotary clubs around Sydney about what it was like to live with a disability. As a result of these talks Rotary funded an international study tour for John to investigate disability support systems and statistics in Canada, the US and the UK.

After returning to Australia John wrote a paper for the Australian Institute of Actuaries stating that “basically people did not know what they were talking about on the subject of severe disability“. John says “Actuaries would look at the so-called statistics when assessing life insurance premiums to assess an individual's differing risks of acquiring a severe disability or dying prematurely from one. This was on the basis of very little real data, what was available was largely anecdotal”. John believed that the evidence base needed to be improved.

Consequently John travelled around Australia talking to doctors, hospitals and disability organisations, collecting as much data as possible. He was instrumental in creating the Australian Registry of Spinal Cord Injuries run by the National Injury Surveillance. This is the world's only national population wide registry of its type. John believes that good data about the causes of disability is pivotal in preventing them. As an example John refers to the x-rays that are now standard practice for all spinal and head injured football players and which can prevent potential cases of paraplegia and quadriplegia.

Of significance, John conducted follow up interviews with people who had spinal cord injuries to investigate how they were going in terms of relationships, employment and health management. This important work led to the realisation that many people living with spinal cord injury were not living good quality lives. This caused him to start thinking that there had to be a better way to support people. John equates quality of life with opportunities to participate in and contribute to society. He believes that everyone has something to contribute if provided with the appropriate support.

John went on to join the professional services firm PricewaterhouseCoopers, where he is a senior partner and continues to think, research and write reports for governments on how to improve disability rehabilitation and support services. From this position John has been instrumental in developing and implementing initiatives to address the unmet support needs of people living with disability. John has played a pivotal role in designing Australia's proposed National Disability Insurance Scheme (NDIS) which has the potential to significantly change the lives of Australian people living with disability.

In recognition of his pivotal role as an Associate Commissioner in preparing the Productivity Commission's report to government on long-term disability care and support, John was made a Member of the Order of Australia, and was given a Special Award by the Prime Minister of Australia at the National Disability Awards 2011.

John's significant commitment reflects his view that people with disabilities have

“potential that hasn’t been realised.” He maintains that “we’re only going to achieve that through better school education, through realising their potential and through creating employment opportunities where they can participate”.

In response to a question about what it takes for a person living with disability to live a good life, John believes that it is helpful to be resilient, tolerant and determined. He attributes his achievements in part to the type of person he is. He explains:

“For me the disability was never anything more than another part of me that needed to be adapted for - like a broken leg or chronic disease  etc. I focus very much on outcomes and the immediate task at hand, and try to do whatever it takes to achieve this objective.  I have also had a tremendous amount of help with my family, my education, my employers and work colleagues”. Further he adds : “I suppose my intelligence too has helped me   to allow me to choose the career that I am in.”

Further John reflects: “I'm also very affected by greatness and the achievements of great people.  I get frustrated with mediocrity and bureaucracy and always strive to do the best I can in everything that I do.”

John is practical in his  approach to creating a good life while living with disability:
“it is important to get on with the task of creating a good life for oneself”. John considers that it is helpful to try not to focus on the disability or the sometimes constraining advice of doctors or therapists, but rather on your own life, your own potential and what you want to do with it. He says there is likely to be a lot of pain, frustration and obstacles to get there so be prepared to persist. John believes that if other people see you as doing your best to achieve your goals, then they will help and be supportive. If other people see you as always focusing on your disability, then that's what they will focus on as well.

© John Walsh 2012. Except as provided by the Copyright Act 1968, no part of this publication may be reproduced, stored in a retrieval system or transmitted in any form or by any means without the prior written permission of the author.