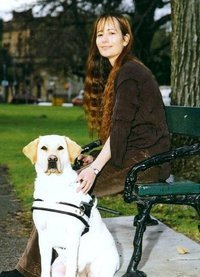 Deana told her story during an interview which was recorded. This is the transcript.

About Me
I live with 5 to 10 per cent vision, which means I see shadows but I don't see detail. I'm married to a supportive husband and we have three kids, the youngest is a girl and the elder two are boys. Our household is male dominated so I try to be a role model for my daughter to show her that females can do things too. I have always been a quietly determined person driven by perseverance and persistence.

University and Finding Employment
I went to university to become a social worker and I’m currently employed as a Financial Counsellor. I have always found employment difficult in terms of people giving me a chance. I have got really good feedback from all the interviews I've been to and I know that at the end of the day if I walked in there without the dog, their approach would be very different and I probably would have got those jobs. I have a point to prove because my family and friends were skeptical about whether I could do university and find work. The reason I have been able to keep going in the face of knock backs is that I want to make a point, otherwise what was eight years of university worth?

After finishing university I found there was a big gap. Once you’ve been at university focusing intensely on studies you walk away from there and it can feel like there's nothing at the end of it, particularly if you can't find work. I recently spoke to another person who is vision impaired and completed his degree a few years ago. He said to me, “Oh, I just found it too hard so I gave up looking for work.” It just made me think “I haven’t come to university for nothing.”

My passion is to work with homeless and disadvantaged people, and I volunteered for four and a half years with Anglicare’s Magdalene Centre. Clients would come in and I’d do the assessment for the food parcels, bus tickets and whatever other needs they had. A few of the clients would turn around and say to me “It’s really nice to see someone like you here,” and I’d say “What do you mean, someone like me?” I would challenge them. Not because I was offended – I knew what they were getting at - but because I want people to think about things before they make assumptions.

It’s a fact that when you go into an organisation they are not used to people with disability saying “I’ll give it a go” or volunteering. I like to make people scratch their heads and think outside the box. One of the first places I ever did volunteer work was for OARS (Offenders Aid Rehabilitation Services). I called up without saying anything about my disability and they offered me an interview. When I walked in I knew I made the coordinator scratch her head, but she said she’d give me a three month trial like she would anybody else. After the three months I continued to work there as a volunteer for twelve months before getting into my social work degree. The coordinator said she would gladly have me back as a social work student, so I went back and my responsibilities grew because she could see I was doing a good job.

The university was actually quite surprised that OARS and two other organisations had asked me to do a placement with them for my final year. The field educator told me they’d never had a student with a couple of organisations wanting them to do a placement and I said to her “Well that’s now, but you wait until I try to find employment.” She told me not to be negative, but I was just being real.

I once applied for a job at Lutheran Community Care. The first time I applied, I didn’t get short listed. The second time I applied for it, I did get short listed. I went to the interview with my employment support worker. I had to fill out a questionnaire and I knew from that point that I wasn’t going to get the job because there were components that weren’t in the ad, and I wouldn’t have applied if I’d known about them. I went into the interview and could hear them whispering. I thought to myself “I’m going to address this head on,” so the first thing I said was “I suppose you’re surprised to see somebody like me shortlisted for the job,” and they said “Well, actually, as a matter of fact, yes!

That was great because it opened up conversation about my disability. They said to me, and I don’t take this as discrimination, “You’re absolutely right, if you had put your disability into the job application you would not have got shortlisted,” which I thought was interesting. I didn’t take it as discrimination; I took at as them being honest about the job. They called me a few days later to provide feedback. They were really impressed but said they couldn’t see me being happy in the position because a lot of it involved going out to families whose lives are in jeopardy and I would be at increased risk. For example, if a woman was in a domestic violence situation and I went to get her and the perpetrator was still there, I wouldn’t be able to see him. They kept my résumé though.

Another time I was working at one particular organisation that had less qualified people than me doing jobs, and even the qualified people weren’t necessarily the best people to do those jobs. For example, I’m a client of Blind Welfare, RSB and Guide Dogs, so as someone with disability I know what it is to be a client and the expectations clients have. That’s something people in the mainstream don’t have – they’ve got no clue because they’re not a client and they just say “Well, that’s the best I’m going to do for that person”. I got disgruntled with that particular organisation because I applied for a job there four times and got knocked back. It was a bitter sweet pill. All the people who knew me and had worked with me there were extremely supportive and could not understand why I was getting knocked back because my qualifications were higher than theirs. It is discrimination, but you can’t prove it.

I decided to look elsewhere for work but it was just too hard because I didn’t have the software to load up in the area and there were other things that were just too hard for me to go and do. I wanted to do the people thing, and as a volunteer, you can’t case manage. On one job I got knocked back because I had no case management experience and in frustration I turned around and said “Well I did it at university when I was on placement” but that just wasn’t enough.

The organisation had a change of management and a coordinator position came up. I applied again, and was knocked back. I rang them and said “I have a social worker qualification, you need to put me on that pile again,” and the guy said okay. He put me back on the pile and a few weeks later said to me “I’ve decided I’m giving the position to this other guy, because he’s worked at the archways and done a lot of drug and alcohol stuff.” I was very grateful that he respected me enough to do that because otherwise it would have been hard to keep working with him. Not long after, the manager came to me and asked if I’d be interested in doing a Diploma in Financial Counseling and I said okay. I hung around for another two years before that was organised and FACSIA paid for me to do that.

My supervisor from my placement at the Magdalene Centre left to start up with Help Line and my current supervisor said why don’t we go to Help Line for a visit. While I was there I was taken to another room, and had a chat that was hardly even an interview. They took my CV and I left, and I didn’t think anything of it. When we got back, my supervisor said to me “Do you know you’ve just been given a job?” I had no idea. I was so excited. I’ve been contracted to Help Line for three years now and I will probably stay there. Alternatively, I might be able to get a job closer to home.

Accessibility
I use Zoom Text with speech. When I was at university I used voice notes which is like a Braille computer and very portable to put my notes in. I tried recording lectures at university but it was just too hard. When I did my major in sociology the lecturers were awesome because they always had notes for me. I also have a doc reader which I can listen to. When I was doing my volunteer work I couldn’t access the computers to use Zoom Text, so I would just try and made do using a magnifier.

My Suggestions to Others
To people who are having difficulty getting a job and are losing motivation, I’d say “Just get up, brush yourself down and continue pushing on.” Make it a part of your everyday routine: brush your teeth, comb your hair, get dressed, and look on Seek.com for jobs and anywhere else you can access. You have to be prepared to reach out and find resources. I go to my Disability Employment Network once a fortnight or once a month – it’s part of what I do.  I encourage all my friends to go to a disability employment agency, and a friend of mine who lives with vision impairment is now going to Multiple Solutions.
I think the most important suggestion I can make to other people is follow your passion, because it’s your passion that keeps you driven.

© Deana Ivesen 2012. Except as provided by the Copyright Act 1968, no part of this publication may be reproduced, stored in a retrieval system or transmitted in any form or by any means without the prior written permission of the author.