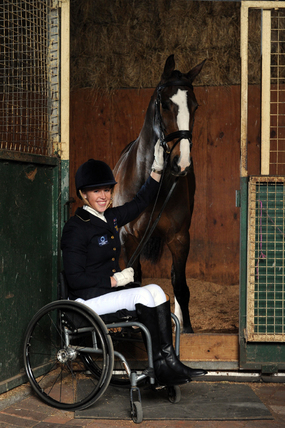 Grace grew up with her parents, David and Stephanie, and twin sisters in Moonta on the Yorke Peninsula. She started out as just another young country girl with a dream to have her own pony. Before and after school she would ride her bike to clean out the stables and ride and feed her horse. "All I wanted to do was ride," she says.

When se was in Year Seven at Moonta Area School, an accident happened. It was Friday 13th, 2002, and she was 12. She got home from school and was undecided about riding, then felt guilty and went. She was returning to the stables on her horse, a Galloway named Jim. She passed her house and spoke to her parents who were out the front gardening.

Fifty metres from the stable the horse shied and jumped a bank on the side of the road. "He was pretty much out of control so I turned him towards the fence thinking he would either jump it, or stop," Grace says. Instead, he shied away again and headed off under a tree growing by the side of the road. She ducked but as she went under the tree, a low hanging branch hit her back. It dislocated her spine and severed her spinal cord while she was in the saddle.

"I thought I was fine and came through the tree," she says. "Next minute, I'd fallen off."

Lying on the ground she felt, weirdly, as though her legs were up in the air. She looked down and saw they were splayed out at an odd angle. "I touched them and I couldn't feel them and that's when I knew pretty much what had happened," she says. "I screamed for help."

She was flown by Royal Flying Doctor Service from Wallaroo Hospital to Adelaide, where she had a spinal reconstruction the following morning where six pins and two rods were put in her back. Then she spent three months at the Women's and Children's Hospital learning how to manage life in a wheelchair. She says, this "pretty much sums up the whole story of the accident."

What Grace leaves out is that somehow she has managed to absorb without bitterness the acquiring of a disability that could easily have overwhelmed her. Those who know her say she hasn't a self-pitying bone in her body. She is cheerful, gracious and very capable.

After the accident the unanswered question was whether she would - or could - get on a horse again. How did she even feel about horses after what they had cost her?

"It was hard," she said. "Especially a little girl with a dream - that was really hard because I didn't think I would ever be able to ride again and I certainly didn't want to ride the horse I had the accident on."

Her return to riding wasn't dramatic, it just happened. After two months at home- only five months after the accident- she was bored. She had been athletic, her life filled with netball, basketball and horses. She began going to the stables with her sisters and helping out where she could. Finally, her parents told her to put some ‘joddies’ on.

They sat her on a horse and walked tentatively at her side. "I wasn't strapped on. I can sit on a horse alright, it's just that it bounces you around a lot when you start to trot," she says. She told her parents to leave her side, and when learning how to sit to the horse’s stride again, she fell off a few times; but also realised she could still be competitive.

"Not only were there competitions for people with a disability, I could also continue competing in open competitions with all my friends," she says. "Even now, I still compete in open dressage."

As Grace developed her riding abilities after the accident, she gradually accepted that she would have to learn to adapt her way of riding to compensate for being unable to use her legs. Firstly she learned how to ride with two whips, and then eventually modified her saddle so that her legs could be held onto the saddle with Velcro straps, and her feet held in the stirrups with a rubber band.

Grace had not lost her dreams, just adjusted them. Instead of finishing school in 2007, she did Year 12 over two years so she could compete in the world para-dressage championships in 2007, the Paralympic Games in 2008, whilst achieving a high Tertiary Education Ranking.

Currently Grace is practising in readiness for the London Paralympics with a new horse Rolly (Kirby Park Joy), a glossy bay mare with a white blaze.  She says she feels close to Rolly, a beautiful horse who tries hard to please. "You go to a competition and it's like, 'that was awesome, it's probably not going to get much better than that', and then she goes one step further," Grace says. "I am such a better rider because of her."

In 2010 Grace and Rolly finished fourth at the World Equestrian Games held in Kentucky in the USA, and they are hoping to go one better at the Paralympic Games in London this year and achieve a podium finish.

Being paralysed from the hips down Grace cannot use her legs to tell Rolly what to do. In order to overcome this, Grace leans back and shifts her weight, guiding her horse from the seat. Where my bum is in the saddle tells her what's going on, says Grace. "Also the swing of my seat, so the faster I swing, the faster she'll go."

She also uses two whips which she taps on either of the horse's shoulders or rump to provide the direction she would otherwise be giving with her legs. She uses vocal encouragement for reward and praise.

Horses have given Grace so much, and taken so much away. In 2006, four years after she became paraplegic, her mother was killed in a freak accident. She was loading a horse onto a float when it reared up and flipped over backwards, killing her. Grace says the family accepted from the start that riding was a dangerous sport.

"Mum was in the wrong spot at the wrong time," Grace says. "It was literally a freak accident and it's just unfortunate that it's happened twice with the same family but it's a risk that you take.”

After her mother's death, Grace almost gave up riding and would have but for the encouragement of her father. "Dad encouraged me to keep going and it was only two months after that I was selected to go overseas for my first international competition, so it is a silver lining," she says.

If she can, she will dedicate her Paralympic ride to her father who bought Rolly for her and died in April 2011 from prostate cancer. "Dad loved (Rolly) so it's very sentimental," she says. "We've been through a hell of a lot to get me to where I am. I think for everyone it's going to be a bit of a dream come true."

I certainly wouldn't have achieved all that I have without the wholehearted support from my family and friends. Their confidence and support towards what I do, make me believe that I am capable of doing anything! They are all my heroes.

I don't consider myself as disabled and neither do my family and friends. Sure, I get around a little differently, but that certainly doesn't stop me or anyone else from thinking that there are things I can't do. I live my life exactly the same way as I did prior to my accident, and am still achieving everything that I had hoped and dreamed for prior to my accident- if not more!

My advice to other people in a similar situation would be to accept your situation in order to reinvent yourself. There is no point thinking could have, should have, would have, when there is nothing that you can do to change the hand you have been dealt. Don't believe that you have to be different or treated differently because you have a disability. Set goals, believe in your dreams and work like hell to achieve them!

©Grace Bowman 2012. Except as provided by the Copyright Act 1968, no part of this publication may be reproduced, stored in a retrieval system or transmitted in any form or by any means without the prior written permission of the author.