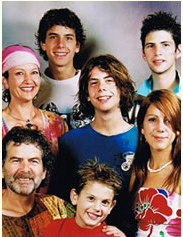 This story was written by Meri in consultation with Wolf.

In a beat of Wolf’s heart, our lives were changed forever Yes Wolf’s life, but also the lives of our 5 children… and my life!

It’s easy to discount the beat that occurred in our own hearts…that very beat that coincided with Wolf’s…That specific split second in our lives, where change and loss occurred for us all  Our lives would never be the same

It’s easy to discount the beat that occurred in our own hearts…that very beat that coincided with Wolf’s…That specific split second in our lives, where change and loss occurred for us all  Our lives would never be the same

Wolf’s stroke impacted immensely on his dear self, something that has been undeniably huge for him… but it can be overlooked that we, his family, have also suffered We have feared and grieved the losses and change for our husband/ father, and also the losses and change for ourselves Wolf has had so much adjusting to do, so much to come to terms with and so much to work on…but it is important to recognise the losses of the people who love him too, and although our lives may now revolve around supporting our loved one, we are aware that we also need to care for ourselves

When Wolf first had his stroke, we were inundated with help and support from friends and family Without that support, I am not sure how things would have been for us during this fragile time I was spending every entire day with my man; holding his hand, trying to bring him back into our world, ensuring that the hospital was acting responsibly around his critical care, pushing for his rights, waiting for daily scan and test results, tending to his personal care, and pressing staff and doctors for answers There were also many a night spent dozing in a chair by his bed, checking for the rise and fall of his chest, and remaining tuned-in to every breath

In addition to my hospital vigil, there were also great needs to fulfil at home Our 5 children needed emotional support and comfort from me Each afternoon after school, the kids would hover around to hear the latest daily reports of their dad Giving these reports was one of the hardest things I have ever had to do Some of the questions that had to be answered for the kids tore me apart “Will daddy die?” How do you answer that when it is expected that he will “Will dad be able to still play soccer with me?" How do you tell them that the doctors don’t expect him to even know who we are if he survives?! I spent many nights rotating from bed to bed, wrapping myself around our grieving frightened children who would each cry themselves to sleep

Their physical needs, too, had to be attended to such as getting to and from school, taxi-ing to their various appointments and activities, meals on the table, shopping and washing… And most importantly, taking them to their dad’s bedside as often as I could manage

So as you can imagine, support from family and friends in these early days was a blessing to us all But as Wolf progressed from his critical state in the clinical setting, to rehabilitation (rehab), the outside support network began to diminish and it was time to face the real world

Wolf was discharged from the clinical hospital after a 2 month stay, and was admitted to a rehabilitation hospital where he spent his next 6 months By this time we were all coming to terms with, and beginning to accept, that things were not going to go back to normal At this time Wolf had no use of his right side and was using a wheel chair All his words were stolen from him by a thief in the night… he was left with no way of communication He found gesturing difficult, was unable to write words and the picture systems were just too limiting

During this time in rehab, Wolf spent many days in intensive care after developing several clots in his lungs He also developed epilepsy with fits that snowballed with only minutes between each seizure … another visit to intensive care He had a rare reaction to one of the anti seizure medications and we almost lost him then too

So although he had survived his stroke, his life continued to be threatened by all manner of post stroke complications We thought we had cried all our tears and were just beginning to rejoice in our sense of relief that Wolf had survived his stoke, but there were more worrying times that followed

Our lives were not only emotionally challenged, but physically also I tried to hang on to my job as I knew that once Wolf was discharged I would be a full time support person, and our family would live off a pension So I would work the mornings and go directly to the hospital to be with Wolf for the afternoons. I would leave the hospital at 3pm to collect the kids from school and prepare their meal and taxi them to after school activities, do the washing and a few odd jobs then back to the hospital in the evenings.

It was also a strain on the kids. Our situation meant that they did not have parents doing what parents are supposed to do.  The kids spent many days and nights staying with other people when I could not leave Wolf.  They often went to school without lunch, in un-ironed or dirty clothes.  They were suddenly expected to take on an increased domesticated role in the home.  They were doing so much more than any other kid of their ages, but without their help I couldn’t survive. I became a very stressed parent and my tolerance became thin. I felt like I was letting my children down because there was not enough of me to go around…but it was a situation I could not control or change.  Anti depressants were a God send through this time.

When Wolf came home it was one of the happiest days of my life. It meant more to me than our wedding day! We threw Wolf a big surprise party! We were a family again.  But not the same family that we once were. There was some anxiety around how I would manage all the things that were done for Wolf in the hospital. He seemed so fragile and precious,  and I struggled with fears of inadequacy.  My biggest concern was that the children would lose their bond with their dad. Without the ability to communicate with the children, I was scared that what once was, could possibly be lost.

I made a prompt book for Wolf to attempt conversation at meal times. Wolf used the book to help him ask relevant questions about the children’s day. There were communication charts all over our house as well as all the aids required for Wolf’s physical needs. Rehab continued on a daily basis with trips in and out of the house to speech therapy, physiotherapy, occupational therapy, recreational therapy, and learning to access the community etc.  Life was full!

Our life is different but we have many gains!

We learned to live on a very small income from Centrelink, and making the dollar spin has become a daily challenge. We have all grown into better people and become appreciative of those things that might once have been insignificant in our lives.  Each one of the children would not be who they are today had their dad not had a stroke. They are each caring compassionate young kids with an appreciation for the small things in their lives. We could not be a closer family.  Wolf and I are truly in love, with much respect for one another. Our relationship is stronger than it ever was. When I ask Wolf whether he ever yearns for what he once had he says no…  Life is better now!” The gains have far outweighed the losses for us.

We are now 7 years down the track Wolf continues to engage in several hours of rehab each week, and he has also discovered some wonderful new experiences that bring quality to his day… such as sailing, art and wheel chair table tennis. I’ve not been able to resume my work as manager and therapist for children with Autism… I do miss that, but on the flip side I love supporting my husband and spending my days with him.

Wolf’s gift in painting has taken us on an adventure which has opened the door to becoming small business owners.  His paintings will be sold along with all manner of items decorated with his creativity such as cards, tshirts, iphone covers etc etc.. To find out more about our business visit our website at:  www.wolfysartcom

Our business will be run from our home in Hawthorndene, which allows for me to still support Wolf as we both work. Wolf has worked hard towards a successful happy life and when our business doors open in a few weeks his commitment to fulfilment will be complete!

At the time of Wolf’s stroke, our lives were turned upside down and our future looked black. 7 years down the track each one of us is changed for the better and we’re happier than ever!  Somebody asked me how that's been possible.  I think the answer lies in our attitude to the changes that have occurred.  As a family we appreciate and love different things.

I love the way the kids bond as they care for him.
I love sitting in his lap and having a snuggle.
I remind him to grab me flowers when I need them! And when he remembers without me asking I am in raptures!

It's all about the choice I made when Wolf was  hit with a disability. It's about thanking the Universe for what I have every morning when I put my feet on the floor. Paying special attention to the beautiful things that happen in my new life and rejoicing- no matter how small. Focusing on what Wolf can do rather than what he can't. Reminding ourselves of how fortunate we are each time we meet someone less fortunate. It's also about 'giving back' as that makes us both feel happy. Taking risks allows us to enjoy life too.

Also living each day as if it's our last...we don't  know how long we'll have Wolf as he has already had further strokes since the big one 7 years ago. But for that matter any one of us could be gone tomorrow as you learn how fragile life actually is. Really hard to put all of this in a nut shell but I guess it's around attitude and gratitude.

And Im always quick to remind Wolf and the kids of the positives. When ever they occur I 'll point them out and remind them of how lucky we are. My faith and gratitude certainly impact on those around me...it's amazing how they all think alike.

© Meri and Wolfgang Karschimkus 2013. Except as provided by the Copyright Act 1968, no part of this publication may be reproduced, stored in a retrieval system or transmitted in any form or by any means without the prior written permission of the publisher.