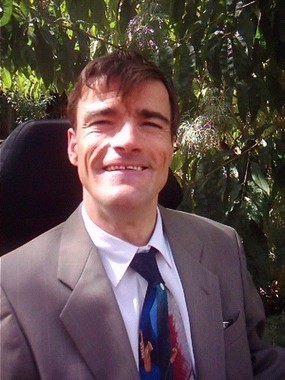 Darryl's story was adapted from his biography on his blog, asking questions specific to the 100 Leaders Project via email and accessing information from the Internet about his achievements.

Darryl was born in Adelaide, South Australia, and for the first few years of his life he was cared for in the Kate Cox Babies Home.  Then he was whisked off to live in what used to be the accommodation section at the Spastic Centre of South Australia. He lived there until the age of five when he and a group of his peers considered intelligent enough to go school were moved to the newly built Regency Park Centre.  Darryl says “I had the normal up and downs of growing up and I was fortunate to have people working with me who were mostly supportive and did their best to make it a home.”

In 1988 he moved into a community house with four other people living with disability. The house was set-up to train people to live independently, with the aim that they would eventually move to their own suitable accommodation. Darryl was keen to go through the process so that he could move into a place of his own which he did just before his 21st birthday. He has been living in his house for 23 years with support workers coming in to assist him three times a day.

Growing up at Regency Park Centre, Darryl realised the importance of social networks and of friends relying on friends to succeed in life. He gained this insight through listening to the staff talking amongst themselves about their life outside of work and watching various television shows. Moving out into the community, Darryl soon learnt that building these networks was not going to be easy due to difficulties of getting out and about with friends, communication difficulties, community attitudes and transport. On reflection he says “the latest advancements in assistive technology and telecommunications over the past decade or so have assisted people like me to more fully participate in wider social circles.”

Darryl uses an electric wheelchair for mobility and an AAC (augmentative and alternative communication) device to support his communication. Anyone who is willing to take the time soon discovers that he is a fun-loving, intelligent and caring person, with a slightly twisted sense of humour, determined not to allow his disability rule his life.

His early schooling placed a low priority on literacy and his poor skills in this area made his early AAC experiences frustrating. Darryl attended his local High School then trained and worked in the information technology field.

Upon finishing his Bachelor of Computer and Information Science in 2008, Darryl accepted an invitation to study Honours in a Bachelor of Arts in the School of Communication, International Studies and Languages. Starting a humanities based postgraduate degree had its challenges and it took Darryl some time to find the focus of his research. Darryl reflects “at the time, I was a company director of the Australian Communication Exchange, the provider of the National Relay Service so I chose a project that would investigate telecommunications for people with complex communication needs.” In 2012, Darryl graduated with First Class Honours.

He has a long history of involvement in advocacy and striving to improve services for people living with disability. Darryl has volunteered on the boards of several community agencies. Between 2005 and 2011, he was a Director of the Australian Communication Exchange Limited (ACE), a not-for-profit company offering Hyundai hearing impaired and hearing people.

His role at ACE and his research have enabled him to discover the point where his interests in people and technology converge. Darryl aims to pursue a research career in the AAC and telecommunications field, exploring ways to improve and broaden access to telecommunications for people with complex communication needs. This aspiration is motivated by a passion to enable people to live more satisfying lives. To carry this further, Darryl is currently planning on commencing a PhD in 2013–a lifetime ambition of his–with a research focus on sexuality and people with Cerebral Palsy who rely on augmentative and alternative communication.

As a determined, lateral thinker Darryl enjoys working on thinking in creative ways to solve problems that could enhance the quality of life for others as well as for him. Darryl says “I am optimistic that I will continue to succeed and achieve exciting things in the future.”

The Importance of Relationships

People have played an important role in supporting Darryl to achieve and he attributes his ability to develop and maintain relationships as an important factor for people living with disability. He believes that having the right people in his life at the right time has meant that he has been able to access the support and resources needed to achieve his goals.

Darryl also believes that his strong Christian faith has been pivotal in enabling him to keep moving forward with his life despite living with complex communication difficulties and significant physical disability. Christianity provides a framework within which Darryl finds hope and encouragement.

In spending time with Darryl his strong desire to assist other people to improve their lives soon becomes evident. He is proud of his educational achievements. He believes it is crucial in living a satisfying life to undertake something productive, meaningful, and challenging. Indeed his pursuit of knowledge and skill through education is directed toward that purpose.

If you would like to read more about Darryl's life go to his blog at: www.thedazz.com

© Darryl Sellwood 2012. Except as provided by the Copyright Act 1968, no part of this publication may be reproduced, stored in a retrieval system or transmitted in any form or by any means without the prior written permission of the author.