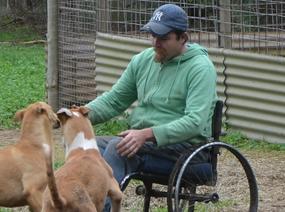 Article authored by David Lewis, for The Border Watch and modified by Kerry Telford for the 100 leaders project.  Image published courtesy of The Border Watch.  Excerpts from conversations with Ben were integrated into the original article.

It is 2:30am on Monday and Naracoorte greyhound trainer Ben Hughes rises to face what is going to be another busy day. Running a 10-acre greyhound property is no easy task, but today is going to be especially busy as he has a couple of greyhounds racing at Warrnambool. This is business-as-usual for your average greyhound trainer but Ben Hughes is no ordinary trainer. Ben uses a wheelchair for mobility and runs his property and trains his greyhounds on his own.

Six years ago Ben, 27, rolled his car on the freeway at Mount Barker. “I finished up spending eight weeks in the Royal Adelaide Hospital and, with no use of my legs, a further four months of rehabilitation at Hampstead,” Ben says. His family is no stranger to overcoming adversity. Ben's father experienced the same kind of car accident when he was also 27-years-old. “My Dad wasn’t found until the morning after his accident which meant he lost a leg,” Ben says. Despite this his father ran a property on the Yorke Peninsula and carved out a successful career in country real estate. Consequently Ben was determined to make something of his life. Ben said the experience of watching his father struggle and develop a successful life has taught him resilience for his own recovery.

Turning an interest into a business

Ben became interested in greyhound racing about 12 months before his accident and while convalescing at his parents’ West Lakes home he spent a lot of time on the computer researching the breed. “I finished up purchasing a few dogs with my brother Nathan, but to be honest we finished up with too many and things were starting to get out of control,” he says. So after two years at West Lakes Ben decided to make a break and purchased the Naracoorte property in order to indulge his passion.

“Obviously the property wasn’t ‘wheelchair friendly’ so modifications had to be made, especially in the kennel area,” he says. “But it’s now at a stage where I can manage most things on my own except, of course, taking a dog to the boxes on race day.” Ben initially had live-in help, but it didn’t work out. Through necessity he has sorted out a routine that allows him to single-handedly rear and train his greyhounds. Ben certainly could never be accused of not having a go.

Ben never has more than four greyhounds in work at any one time and varies the manner in which they are exercised. “I’ve got plenty of galloping room here so I do free gallop them and also utilise a walking machine, but my main way of getting the job done is to use a quad bike with the dogs trotting alongside,” he says. While plenty of time is spent on the property, Ben also knocks up plenty of kilometres travelling to tracks in his quest for that elusive winner. “Besides Mount Gambier, I’ve raced dogs at Horsham, Warrnambool, Ballarat, Bendigo, Gawler and Strathalbyn,” he says. “The controls on my car have been modified so that I can get around and there’s always someone at the track who will give me a hand. At Tara Raceway, in particular, the people have been terrific and I’m really appreciative of their efforts in helping me on trial and race days.”

Ben has been training now for about two years and has had 14 winners with his best dog the recently retired Captain Swift, a winner of three races and a prolific placegetter. “He was a giveaway and even at five years of age more often than not he was generally good for a prize money cheque,” he says.  A recent winner was Tortoise Shell at Tara Raceway and a recent newspaper article describes the most recent win for Hughes’ greyhound Borrego as amazing. The article recognised that Ben uses a wheelchair and single-handedly trains the dogs, and state that when one of Ben's greyhounds wins “it is always special” (Embling & Contributors, 2012).

Ben recently bred his first litter. “We paid good money for a New South Wales-bred dog and she was a little disappointing on the race track. Some of her litter were really good so we thought she was worth breeding with,” he says. She finished up having a litter of nine with the Hughes brothers quite content to keep four and sell the remainder. Ben is obviously quite proud of the pups.

Ben seems to have an answer for any problem he encounters. There have been lots of obstacles in recovering from the accident and starting a successful business. When confronted with these obstacles he says his approach is to find a way around them. He says don't panic - there is always a way around the problem.

Ben’s suggests people who are facing similar circumstances could learn to be independent straight away. “Don't let other people push you around or do things for you. Learn to do it yourself and don't rely on other people,” he says. He also refers to the lessons he learnt in rehabilitation as important to his ongoing independence. Ben has organised his life in such a way that he is able to do most things for himself including working the property and training greyhounds. If there are tasks to be done that he can't manage he will enlist the help of family members.

Ben describes himself as an ordinary, easy going, quiet person who is not outstanding in any way. He prefers to achieve things quietly without much fuss. Consequently he is a determined person but is not very public about this.  Ben uses the word “resilient” to describe himself.

© Ben Hughes 2013 Except as provided by the Copyright Act 1968, no part of this publication may be reproduced, stored in a retrieval system or transmitted in any form or by any means without the prior written permission of the author.