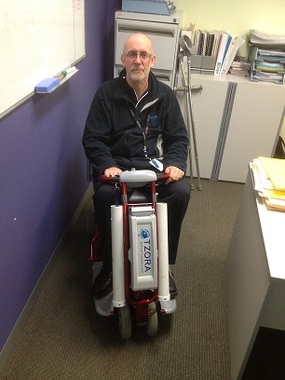 Chris told his story during an interview which was recorded.  This is the transcript.

I’ve had MS since 1990. I’ve now got secondary progressive MS. I'm separated and have two adult children - a 27 year old daughter and a 24 year old son. My son lives at home with me. I live at Hope Valley and in many ways the house I live in is not really the best place for me now and it won’t be in the next couple of years. We will be selling it.

At the time I got MS my daughter Sarah was five and my son, Michael was two. I still wanted to go and kick a soccer ball with Michael and watch Sarah swim. I’m so thankful that for the next fifteen years I was able to do that. I was able to take Sarah swimming early in the morning, and kick a soccer ball with Michael, run around with him, and go bushwalking with the family. If I have any regret in life today it’s that I can’t do that anymore.

Adapting to a changing family dynamic

Eighteen months ago my marriage ended.  My MS did have a lot to do with it. I do blame myself because for years I didn’t divulge how I was really feeling. That’s a regret I have to live with. On reflection I should have brought the family in more with what I was experiencing with MS. But looking back I think I was trying to protect them, and that was wrong.

But Sarah, my daughter, is really good. She always makes sure my granddaughter knows who I am and what I’m doing. They will pop in occasionally and Sarah makes sure she does see me and I’m thankful for that. I am most proud of my two kids. They've been fantastic and so supportive.

The hardest thing I've had to cope with is not being able to play with my granddaughter on the floor or pick her up and cuddle her or get down to her level. It is hard knowing her other grandparents are able to do that. My brothers sat down with me and said “Look you can read to her, tell her stories, you can do this and that etc. But it is still hard because I want to go for a walk with her; I want to hold her hand.

When my parents left England I was nine. We're ‘ten pound Poms’!  I was the eldest of three boys, my middle brother was six and my youngest brother was two. At that stage we left England to give us a better life because we were always unwell. I had Scarlatina (scarlet fever) when I was a kid and my brothers were also sick with other things, so Mum and Dad made a decision to leave. They had three young kids, and to come out to a place they didn’t know, with Dad trying to get work and trying to make ends meet - that wasn't easy. My Dad was always a manual worker and he went from job to job and then lost his job. For two years he could not get a job anywhere. But he kept going, we kept going. He eventually got a maintenance job at a hospital until his retirement.

Dad was from the ‘old school’. He worked hard and came out to Australia to give us a better life. He never gave up even though he lost his job a few times. He was a Fitter and Turner by trade and didn’t know the meaning of “giving up”.

I still work full-time. My workplace is very supportive. For many years I never told them at work I had MS. I just muddled along and eventually it got to the stage where my doctor said to me “You know you’re going to have to start using a stick because you’re walking as if you’re drunk.”  And I started to get stares at the shopping centre where I was walking and it looked like I was bouncing off walls. And so that’s when I started to use a stick and that was the time I had to own up at work and say “Oh yeah I’ve got something” and that was about five or six years ago now.

Since then though we had a big discussion and they basically said I should have said something. I explained why I never did and it was purely because I love my job and I didn’t want to be put off. All these thoughts go through your head so you keep quiet and you think to yourself “Well I look alright.” I look okay here and once I’m sitting in my chair at work yeah no-one knows anything.”  But when it got to the stage where I was wobbly I started having to own up, then I used one stick, then the next couple of years I went to a crutch, then two crutches and it’s gone on.

Since then the company’s been great. I mean, yes, I had to pull back my travel because it was getting hard. This Being a payroll product manager (business is Payroll/HR software) I had to go and talk to the ATO and clients a few times in Melbourne and Sydney. It’s just now got to the stage in the last two years that I haven’t travelled at all for work; I’ve been able to do things on the phone … the video conferencing all that type of thing.  So technology’s been marvellous for me there.

It got to the stage where they were watching me trying to walk up some stairs and I fell outside the front door one morning, the boss actually saw it happen, and I think he thought “We’d better start thinking about how we can help you here”, and that’s when MS Solutions was contacted. I've linked into the ‘Job in Jeopardy' program through our HR department.  A contact from MS Solutions came out and saw me as well as the occupational therapist and then they watched what I did and how I got into work and how I did bits and pieces and then from there it was magic, it really was. A mobility scooter now helps me get around and this has helped with my confidence to get some independence back.

Reading as relaxation and support

When I am not working I read a lot; I love reading; I read as much as I can and I love watching soccer. I avidly follow Tottenham Hotspur in the English Premier League and I’m a member of Adelaide United.  My father and I go and see as many games as we can. We have membership tickets. I love going to the games. By the time I go to work and come home it's six or seven o'clock at night. After that I watch TV, read the paper or read a book.

I’ve done so much reading over the years.  You read other people’s stories and I often go online to the international MS Society and read about different people around the world and I think “Well yeah that’s me in a way … I’m not giving up. This thing’s not going to beat me. I’ve still got my faculties and I’m still going places.”  But I must admit it was hard when I started to have problems getting around.  I thought “what’s going to happen?”  I felt that if I left work I had given up. I thought “No way am I going to give up.”

The way I cope with fatigue is with a reclined chair in my bedroom and I’ll often go and sit in that and recline back and just grab my book and just sit and read my book. I find that although you’re still using your brain it’s a different type of work. I don’t need to sleep to relax. I can just sit there with a book … or I put my headphones on and I just listen to music.

I never give up

I would never give up.  Yes MS is a disease and I had to deal with it.  Even though I was married, I tried to go it alone and as much as people would ask me how I felt, I'd say “Yeah I feel great” when I really felt horrible.

I work with my head and I’m an avid reader and I just focused on getting to work and doing what I had to do.  When I came home I was exhausted and didn't want to talk about how I was feeling.  I would think “Oh I’ve had it now.”

When I come up against an obstacle I basically sit back and take stock, look at it, then try to find a way around it I won't just give up!  I've problem solved. I’ve learnt to do that more over the last few years only because of the difficulty in getting around.

Reflections on what has been important

If I was suggesting to others what is important about living with disability the biggest thing is to share.  Don’t be afraid to share, and not just with immediate family but also with the people at work who have said to me “tell us how you feel so we can help you.”  I think my biggest regret is not sharing the experience of MS and how it was affecting me.  My advice to others is don’t hold on to it and don’t keep it to yourself. Talk about it.

© Chris Keen 2012. Except as provided by the Copyright Act 1968, no part of this publication may be reproduced, stored in a retrieval system or transmitted in any form or by any means without the prior written permission of the author.