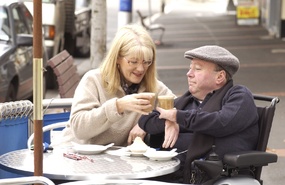 A journey to self-empowerment

This story was developed by the Department of Human Services, Victoria and has been adapted for the 100 Leaders Project.

John’s story is about his life with a congenital physical disability.  He has never let his disability stand in the way of his goals.  It was his strong desire to lead an independent life and his willingness to take risks in life that directed him to try new ways of getting support and make his own life choices.

John was born with a physical disability however he has never let his disability stop him.

John welcomed the opportunity to leave home at the age of 18, and just like any teenager he sought adventure and freedom! 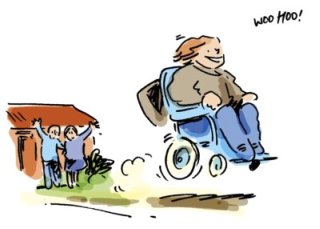 John needed help and support to live on his own and the only place he could go at the time was Flete Court which was a modern accommodation setting.  Here John enjoyed plenty of freedom thanks to the support of 24-hour nursing staff—including many a late night at the pub.

Soon after moving to Bendigo to live with his girlfriend, a carer he met at Flete Court, the relationship broke down and John suddenly found himself alone in Bendigo.

Despite his strongest efforts to remain living independently with the help of volunteers John was forced to seek other accommodation.  He did not want to return to his parent’s home.

But living in Bendigo’s hospital for the aged was never part of John’s plan.  Every evening meal was the same offering of cold sandwiches.  He was surrounded by frail, aged people who were ill and dying—it wasn’t much fun for a lively young man like John. 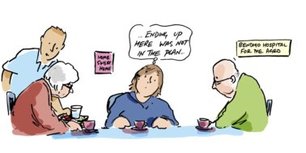 John was determined to live his own life despite the aged care hospital.  To meet people his own age and have some fun, John joined the Bendigo Lion’s Club.

It worked—a few months and one Christmas kiss later, John had finally met his “Miss Right” in Robyn. 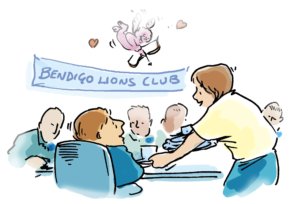 However, living in an aged care hospital and starting a new relationship had its own challenges.

When John got a call from DHS to say he had got funding to help pay for his disability supports, it was the start of a new period in his life; one where he would finally have more choices.  The best part was that he could move out of the aged care hospital and move in with Robyn! 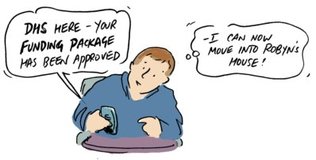 John and Robyn were very open about what they both brought to the relationship.  John used his DHS funding to pay for carers to visit the family home to help him with day-to-day tasks.

When Lisa from DHS called to offer John the chance to receive his disability payments directly into his own bank account—rather than the money going direct to the agencies to allocate him support—for John it was a “no brainer”!

Direct payments meant that he could choose exactly the supports he wanted and from whom, by recruiting carers and buying services to suit his own needs.  John developed his own support plan with Lisa’s help, and pretty soon he was funding his own choice of services, including help with gardening and laundry.  Importantly, direct payments enabled John to instruct his support staff to do the job how he wanted. 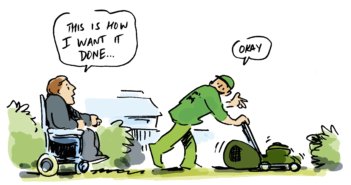 John spent some of his direct payments to train up an Assist Dog, a super smart collie called Jimmy, to help break out of his dependency on carers.  After an afternoon of training, Jimmy knew “juba juba” was the call to pick up something John dropped on the floor.  If John was home alone, dropping the phone or computer mouse was an issue, so Jimmy was a great help. 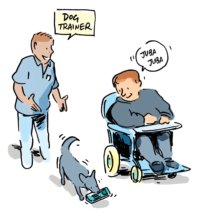 Jimmy the dog provided a distraction for the couple and helped break the monotony of John’s dependence on carers, for himself and his wife.  This meant a lot to John—especially since his mantra is “happy wife, happy life”!

John embraces new technology that reduces his reliance on carers and enables him to live more independently.  A device like a Dictaphone can make a real positive difference for people living with disability. 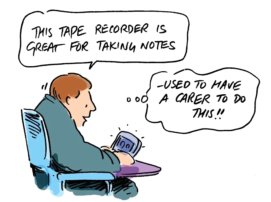 How does John feel now about the individual planning and direct funding he has received from DHS?  “It enables me and gives a sense of lessening the impact of my disability. It empowers me with extra tools which can result in new opportunities.”

John currently works in advocacy roles for the benefit of people with a disability in Victoria.  A key element to positive outcomes for families and individuals travelling the self-directed funding path is two-way communication.

John has developed an online newsletter/blog with commentaries on a range of disability issues.

“I’m finding it a really powerful way to interact with others; I invite you to be a part of my subscriber base of over 120 people (and growing rapidly).  Go to http://www.johnmckenna.com.au/.”

So what advice would John give people who are facing similar dilemmas?

“When deciding whether to move into the aged care hospital I was given great advice which I have never forgotten: Sometimes you need to surrender one battle so that you can fight another.

“I encourage people to take educated risks that involve some research, but more importantly an understanding from all that if it doesn’t work, something has been learnt and it’s great that you gave it a go.”

John suggests that it is important to be aware of the advocacy agencies that can assist a person to get what they need.

© John McKenna 2011. Except as provided by the Copyright Act 1968, no part of this publication may be reproduced, stored in a retrieval system or transmitted in any form or by any means without the prior written permission of the author.