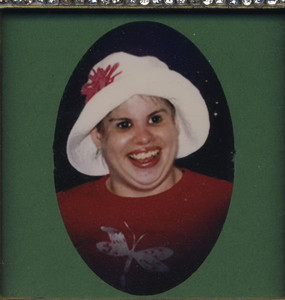 The story so far: In 1978, Toni was born. She was extraordinary; always smiling and playful and full of fun, excelling in all she did, chucking her dummy away at nine months, sitting in her highchair feeding herself at ten months, toilet training herself at 18 months - what a joyful and easy child, lucky for us because we lived interstate and had no family backup.

Our son was born two years later on Toni's birthday and life was good. In 1981 our little Blondie Toni had a cerebral haemorrhage (a stroke in layman’s terms and the name we give it so others might understand). We were informed she had cancer and would only live for about two weeks. They put in a shunt and we prepared to come back to South Australia for her to die.

Toni’s mum, Wendy, told everyone to be happy and positive around Toni and to leave the room if they needed a cry. She needed to be in a positive place. At our first neurosurgeon visit he informed us that the tumour could not be removed - “Like getting a pip out of an orange without cutting the orange,” were his words. But he also said “do not give up”, and we didn't. During this time Toni was diagnosed with epilepsy and drugs were set up. Physiotherapy began to help with partial paralysis of her left side. A day splint and a night cast were made and worn continually.

Radiotherapy was five days a week for six weeks and she never complained, even on the day when one nasty nurse made her take some foul meds; she simply threw up on her. Every other time a kind nurse had managed to get her to keep it down.

It broke our heart the morning she woke up with hair in her mouth as it had fallen out during the night, but we never let on and a beanie became standard headwear for a little while.

We were living in an old rental close to the city but it was too expensive, so we moved into a housing trust place; it had no bath for the children. Toni's head was very sensitive for a little while and the skin peeled away like sunburn.

Back in those days the radiotherapy was in its infancy so just one huge ‘zap’ every day. It saved her life, but damaged her brain and pituitary gland, today this may be different, but it was the best they could do then. Other than the limp and general weakness in her left side, hearing and sight included, Toni showed no signs of disability. And of course we did not look for one.

Forward to 1983-84, and a busy two years with both Toni and her brother starting school and kindergarten during this time, us all moving into our own home and a baby brother being born.

During Kindergarten, we noticed Toni was not advancing. The teachers said she was at a normal level but we knew she was highly intelligent and way ahead of her age; she had stopped 'learning'. An assessment was done and then she attended a special kindergarten until she was almost six years old, then a special school followed. Both were great when she was little and still walking about with just a limp.

The epilepsy was not so easy. We had never dealt with anything like it—none of our friends or family had it and the seizures were few and far between.  We were a bit hit and miss with her meds and she ended up having a huge one at Easter with a hospital stay to follow.

This was a huge learning curve for us. A regime was set up, which to this day we take very seriously, and we all decided that less was best.  Toni has the occasional grand mal* and many petite mals**, but the alternative is she would be zonked out on drugs.

We bought a house near her school and got on with it. Wendy was an extremely dedicated stay at home Mum, doing all the school responsibilities and attending all appointments - usually several each month. Trevor worked very long hours to make sure this could happen. We were of the generation that both parents worked but this was impractical in our situation. Wendy ruled the roost, running everything else. It was not about fun, it was about getting everything done. The boys were probably casualties of this lifestyle. Trevor would eat meals with us so they knew who he was.

We did not have family close by, and those who were, were unable to help. As a family we ate every meal at the dinner table and discussed what was happening in our lives. We never lied to the children, just omitted the bits they did not need to know, all the time being aware that they needed to ‘stay in the loop’.

Being positive people we did not really think much bad would happen anyhow. I used to say how I was frightened for Toni when she would one day take a bus to get herself to school and work; little did I know that would never happen.

As the years progressed Toni's mobility was a worry because having one ‘short’ leg plus being epileptic meant falls were the norm. A hat became standard wear, providing a slight cushioning effect, and at school she wore a helmet in the middle years.

There were no mobile phones back then and Wendy had three kids at three different schools, was on every canteen and committee there was, and also attended many committees for disability. Today, we are seeing the hard work has paid off and it is making it a lot easier for the next generation, although there is still much to be done.

Trevor was always working to keep paying for the meds and mortgage. There was no carers allowance back then, though now it is a huge help. It was tough but we were happy, and we were young and full of optimism. Trevor and Wendy supported each other by letting them get on with their respective ‘jobs’. Wendy did work a little for Trevor but that didn't last long as frequent appointments for all three children, meant that this was unreliable.

And then: 1995 saw deterioration in Toni's speech and mobility, so back to the neurologist and three new tumours were discovered.  Although benign meningiomas, one was growing very rapidly so removal was the only option, although the ‘new’ neurosurgeon really could not see the point. I did not like that man.

Then rather strangely, Toni now had a label - Acquired Brain Injury - so funding was available. A wheelchair was ordered and our house was assessed and some rails added to the bathroom. Personal care funding was made available five nights a week and Toni was bathed and dressed for bed, though we did it on weekends.

We got respite funding, no worker, but some funds to pay one when we found one, which we did and we took the boys away once a year for a few days. Toni was due to leave school and her osteoporosis pain was giving her hell, she seldom complained but we often heard her cry out.

In 1999 we paid off our house, 11 days later we got a new mortgage and bought a block and built Toni's house with a four foot deep heated pool, as she is only four foot. It is enclosed and Trevor can never retire as it costs a fortune to run. She has a spa bath and lifters for the pool and bath; her mobility has decreased so she now requires two person transfers.

The biggest challenges came in 2006 when another of the tumours required removal. We went in feeling confident and were devastated when she was left paralysed.

This was a major setback and a lot of things had to come into play, extra staff to get her up in the morning and during some parts of the day, and adult pads as we could not always get her to the toilet in time. She hated to wet herself and held on and held on. And perhaps the most heart wrenching sight for any parent; seeing their child sad, really sad.

One day she was sitting outside and we automatically put her tray of beads in front of her. She eventually managed to lightly hold the threading when we placed it in her not-so-good ‘good’ hand but just looked at the beads with the saddest look I had ever seen, as she was unable to lift her arm to pick up a bead to thread. A Kinesiology session saw the therapist leave in tears and Toni raise her arm. Brilliant!

And now, since a car accident left me weakened, Trevor is now the Primary Carer. The respite is about one week a year as costs go up but funding does not keep up and we still need to find a decent worker to do it. Toni is now at a day option hub four out of five weekdays. It’s not a good place to go, but Wendy cannot lift Toni for toileting, and funding does not stretch for two people all day every day.

One day a week she is home doing computer and cooking skills with Wendy and her youngest brother Ash, who is now a recognised carer and is extremely important in all our lives. It is not ideal for siblings to be carers but when asked he simply says “she's my sister”, and to me he says, “and I would do anything for her”. None of us know what the future will bring and we cannot change what has gone before.

We just have to keep on loving each other and communicate however best we can.  Toni loves her dog and cat and can say their names, she also loves the girls that come in nightly to swim her and bathe her and dress her for bed. She has lots of beautiful clothes protectors, eats her dinner with us, and takes her meds when left near her, requiring some assistance with her drink.

Toni knows everything we talk about and has a special smile when we are talking about her. She knows everyone that puts their cheek down for a kiss and some get a raspberry - always with a little grin.

Toni has a very colourful collection of hats which cover her scarred head and fine wispy locks. Her beautiful blonde hair is gone but her sense of fun is still intact. There are now nieces and nephews in her life and when they are little they are allowed to play with her beads and I believe there is a connection between Toni and these innocent little beings.

Toni's brothers have rules regarding leaving stuff lying about as she may trip and this is carried through with the littlies. In the pool, Toni has less pain and more mobility and loves it when extras can swim with her, whether that is her mum or dad or brother or gran or the littlies, there is a lot of laughter and splashing going on in that pool and that is fantastic!

© Toni Applebee, Trevor Applebee and Wendy Applebee 2011. Except as provided by the Copyright Act 1968, no part of this publication may be reproduced, stored in a retrieval system or transmitted in any form or by any means without the prior written permission of the author.