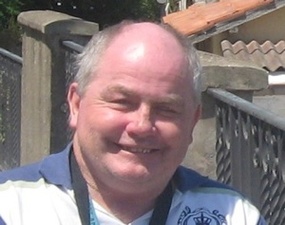 Sadly, Jim passed away on 15th of January 2012 following a heart attack.  Jim’s family would like this story to be shared with you in his memory.

Jim’s story has been adapted by 100 Leaders Project researchers from his book 'You Owe Me Dinner'.

Jim Stallard had a devastating fall which resulted in him sustaining C6 quadriplegia. It was the beginning of a marathon of medical and surgical procedures, and intensive rehabilitation.

During this time Jim almost lost his life when a blood clot threatened to bring on a cardiovascular event.  Later Jim learned that one doctor literally reached inside his chest, pulled out his heart and pumped it with his fingers.  This would not be the first time that Jim's life would be at grave risk.

Jim's loving family, his wife and two adult children were with him every step of the way.  When it came time for Jim to re-enter the world he was all too aware that he was re-entering on different terms—as a person living with disability.  As a C6 incomplete quadriplegic Jim would never walk again, had no feeling from the armpits down, and little feeling of strength in both arms and hands.

Disability was not unfamiliar to Jim. During his earlier years Jim had worked in the disability field as a psychiatric nurse and social trainer for people living with intellectual disability.

Jim was always aware of the discrimination and prejudices that society held toward people living with disability.  In his work he sought to provide experiences for people that would reinforce their worthiness and give them access to ‘normal’ experiences enjoyed by other members of the community, such as being a member of the local library.

Coming home from the Rehabilitation Hospital entailed a multitude of modifications and adjustments to the family home so that Jim could easily access the things he needed throughout the day.  At first Jim's family supported him with the activities of daily living.  Eventually Jim had access to a combination of carers and family members for support.

Jim was asked to write a book about his experiences and it was through this process that he found inner strength and self-confidence.  He called the book God's Quad and so began a time of speaking at churches and clubs.  Jim really enjoyed doing this and threw himself into it wholeheartedly, regaining a sense of self-worth and purpose.

Jim felt like he was gaining new strength and confidence every day.  He was given a boost when the doctor gave him the all clear to try to get a driver's license.  The first lesson was scary but somehow he passed with flying colours and felt incredibly proud. Despite being plagued with bladder infections, having a serious wound on one foot, and constantly experiencing falls as part of his daily routine, Jim was grateful to be alive.

Jim, Pam, Jenni and Chris went on a week-long adventure to Vietnam to celebrate.  This was against the advice of the district nurse Michael who was adamant that Jim should not go because of the wound on his foot.  He warned Jim that he could lose his leg.  Jim replied “I could lose a lot of things.  In fact, I already have.”

Jim whispered to Michael sombrely, “Look Michael I am going on a great family holiday and they can cut my leg off when I get back”. “That's not funny,” snapped Michael.  Jim stared at him; he wasn't joking.  Many people asked us why on earth we had chosen such a difficult place to go. Jim just laughed it off and said he liked challenges.

Jim, Pam, Chris and Jenni's experience of Vietnam was by no means sedate.  It included all of the challenges of negotiating a wheelchair in a country that is not designed for wheelchairs.

With the generous willing spirit of the Vietnamese people and the precision teamwork of Jenni, Chris and Pam, they managed to orchestrate their way through many tricky situations including a boat trip up the Mekong Delta.  As Pam, Chris and Jenni pushed Jim around, pulled him up gutters, took turns at changing his dressings twice every day, Jim realised how grateful he was to have such a strong family around him.

The challenges of travelling in a wheelchair would confront them again during a subsequent holiday in China in 2006.  With the help of Pam, Chris, Jenni, Fiona, and Jason, Jim would ascend the Great Wall of China and gaze down from its lofty heights.  Jim realised that nothing was impossible when surrounded by strongly motivated family members.

There were many people with disabilities in Vietnam, most of them amputees.  They were probably bomb victims and Jim’s heart went out to them. Jim quickly learned that he needed to have the same resilience and inner strength that they had if he was going to make the most of what he had.

Jim’s foot had continued to deteriorate during his travels.  Meanwhile, Jim continued to speak in churches around Australia about his experiences of disability and his faith.  Eventually however, Jim became sick.  His health ran down to a crisis point where he was admitted to a hospital.  Despite attempts to save his leg, Jim’s leg was amputated.

After the glorious experience of attending his daughter’s wedding in New Zealand, Jim and Pam returned to Melbourne only to find that Jim’s health was deteriorating in response to an infection.  The doctors did not hide the fact that it was serious and could lead to Jim's death.

Jim pondered how disability could become a vicious cycle of complicating factors that can send some people in a downward spiral of despair.  Jim considered himself fortunate in his acceptance and realisation that his disability was not going to go away.  Still, Jim was well aware that disability was much preferable to the alternative—death.

As Jim became sicker despite the endless antibiotics being pumped into his veins, the struggle was getting harder.  The state of Jim's health was playing havoc with the diabetes causing medical emergencies as doctors and nurses struggled to bring his blood sugar level under control.

Once again Jim was grateful to be alive.  However he was not well and lived in a haze of extreme nausea, the effects of antibiotics which were prescribed to contain the infection. Jim was eventually discharged and returned home.

Pam and Jim had never imagined their children, now adults, would have to become carers.  Nonetheless this is one of the hidden consequences of disability worldwide and they realised they had not escaped it.  Both Jenni and Chris had become experienced carers for Jim while they were at home.

After an accident in 2006 Jim had his other leg amputated without an anaesthetic.

When Jim talked at churches he emphasised how the circumstances of disability did not separate him from the love of God.  He said that the big problem was when we confuse our changing circumstances with God's unchanging love.

Jim reflected on how fortunate he was to attend a church that embraced him and Pam along with many other people living with disability.  Some Sundays there were as many as five electric wheelchairs, several pairs of crutches, and a deafening hum from the countless hearing aid batteries that need changing, not to forget people who were sight impaired or experiencing mental health difficulties.

Life has continued to run its course with the death of Murdy, Jim’s much loved father-in-law and the delight of new grandbabies, in between managing ongoing health crises.

Jim ends his book quoting the words of the Theologian Jurgen Moltann who said: “The pain of despair surely lies in the fact that a hope is there, but no way opens up toward its fulfilment”.  Jim concludes that for many people living with disability the hope is there, but it is not opened up to them.

Jim's faith is a common theme running throughout his book and his interpretation and understandings of disability. Jim writes: “Jesus said, when you have a banquet, invite the lame, the maimed, the blind, the crippled and the poor (Luke 14:13).  He doesn't mention healing or even praying.  He doesn't mention sympathy or empathy or compassion.  Jesus talks about a place at the banquet.”

Jim concludes that Jesus wants you to give him hope.

© Jim Stallard 2011. Except as provided by the Copyright Act 1968, no part of this publication may be reproduced, stored in a retrieval system or transmitted in any form or by any means without the prior written permission of the author.