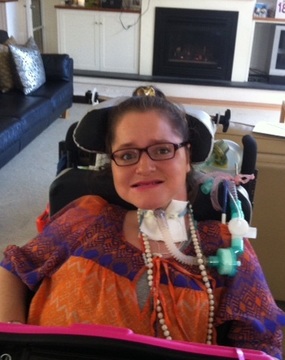 Alice is an 18 year old girl, who talks about her life journey. Despite the ineffective functioning of vocal cords she was able to work towards communicating effectively with people.

Alice was 18 months old when a virus attacked her brain stem. She was in a coma for three weeks. When she recovered she had lost her mobility and the ability to use her vocal cords due to damage in her nervous system.

Alice has to use a ventilator constantly to breathe and this machine is always near her. Alice depends upon it for her survival. She has carers and nurses around her 24 hours. They help her with breathing, suctioning, looking after her tracheotomy, physiotherapy, getting dressed and giving medications.

Alice spends most of her time at home with her family and also has a respite house in the community where she spends three nights a week. Whether at home or at respite Alice has many games, books, music and movies which keep her busy.

Alice is in her second year of Year 11 at Unley High School where she has been since Year 8.  Alice will complete Years 11 and 12 over four years and so far she is achieving very good grades.  At school Alice has a solid group of friends, both living with and without disability, and last year she attended the Year 11 formal. Her nurses and family helped her with the homework.

With regards to her speech impairment, Alice says: “When I was young my communication was mainly by people asking me questions; and then I would say ‘yes’ or ‘no’ by moving my head or making sounds with my lips and mouth.”

“People would always guess what I was trying to say, if they did not get it right, I felt frustrated—I didn’t have a way to tell people what I wanted to say and this made me sad.”  However, despite having speech impairment Alice managed to communicate effectively with people by use of different techniques.

Alice went to a camp called Camp Yackety Yack in 2007 which was organised for children having difficulty speaking. Alice says that attending this camp was a turning point in her life; firstly because it was the first time she had gone on an overnight camp, and secondly because she made friends with people who had similar impairment and who communicated with the use of a computer.

Alice then began using a communication device with picture words and short phrases. Alice had to learn to spell words and learn how to use her own voice. But it became a lot easier with the help of the computer. Alice can now communicate easily with people. Some of her communication techniques include:

Computer technology has had a big impact on Alice’s life. She now uses a computer to do her school work, play computer games and listen to audio books. Her computer helps her to connect to the internet to check email and chat with her friends.

This enables her to talk about her feelings and her opinions.  She has presented at the last two AGOSCI conferences one in 2009 in Canberra and also in 2011 in Adelaide.

Reflecting on her experience, Alice says: “When people talk to me, they need to give me enough time to finish what I want to say, not try to finish my sentence for me, and not ask mum, dad, my friends or my carers to answer for me.”

“People also need to remember not to think that because I am in a chair, I am not smart.  By not letting others talk for me it makes me think for myself and make my own opinions—I do not have to agree with everyone because I can make my own mind up.”

One piece of advice that Alice wants to provide to people undergoing a similar situation:  “When you have difficulty talking, the main thing is to never give up no matter how hard it is—you should try to do your best.”

© Alice Waterman 2011. Except as provided by the Copyright Act 1968, no part of this publication may be reproduced, stored in a retrieval system or transmitted in any form or by any means without the prior written permission of the author.