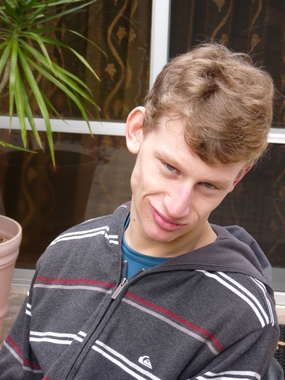 Laurence gave his mother permission to support him to tell story. Laurence experiences difficulties with communication and uses a communication device but it is time consuming. Therefore Laurence’s mother often speaks with nods or confirmation from Laurence.

Laurence is 24 years old and lives with athetoid Cerebral Palsy. He lives in the Adelaide Hills with his parents, his sister Ella and his dog Tye.

Laurence attends university on a limited basis through a mentoring partnership. Ingrid, Laurence’s mother says that Laurence is part of the ‘Up The Hill’ project, which means he has a mentor to take him to one topic a semester, and he can stay in the program for three years. He’ll get a certificate at the end of it. It’s called an ‘audited topic’, and so it’s optional to put in written work for assessment.  He’s able to take part in tutorials, seminars and attend lectures.  When asked about his experience of the program, Laurence says, “It is good. I meet people.”

Ingrid reminds Laurence that he also meets up with a friend at university sometimes. She says “the program requires that we provide a support worker, who cannot be a family member, while Laurence is at university. I feel he really only needs support at lunchtimes. Because the mentors are students, they may not be comfortable with assisting someone in a wheelchair and the program clearly states they are not to provide any personal support, which is fair enough. In reality the support worker sits around most of the time, except when Laurence eats or drinks. I suggested that the support worker could come in around lunchtime for an hour, maybe two hours, as there’s no need for someone to be sitting in lectures with him, but this has not been approved.

Ingrid adds that the mentor provides support for learning. Laurence is not a full-fee paying student. He is not eligible for the type of support other students receive because he’s an audited student and pays a minimum fee. But he does have a student card and can use the library and its resources. Laurence likes being around other people and learning things. He applied for “Up The Hill” in 2011 and because it’s difficult to know at the beginning of each year if any mentees are dropping out and how many places are available, he was thrilled to find out at the beginning of that year that he had been accepted. However, a suitable mentor could not be found because the students had only just started and so the coordinators of the Project didn’t have a diverse skills base to draw upon.

Ingrid tells us the mentors do things such as read some of the required texts to the student, help them prepare for tutorials or find resources. This semester he is studying film and after lectures, the new mentor watches the DVDs with him in a study room in the library. The mentor helps Laurence get around the university and sort out administrative things. When asked if he likes his current mentor, Laurence indicates that he does.

Ingrid points out that each mentor is only available for one semester4, which means that over three years, Laurence will have six different mentors, and so each time a mentor and mentee need to get to know one another. The mentor’s work counts towards his/her overall assessment. Ingrid says it can be difficult to organise support workers with each change of timetable, but without them Laurence is unable to attend University.

Ingrid reflects on Laurence’s experience at another tertiary institution.

For a while, Laurence attended a class that was quite good for people struggling with literacy. The class worked well together and the Disability Officer worked to facilitate his learning.  But after a year or so, the course coordinators felt that they couldn’t take him any further.

Then for a while we had quite a good system there whereby he was studying a course to be a support worker in schools. Because he was working as a mentor in a school through JFA Purple Orange, we thought it would be a good skill base. After one semester, Laurence was told that as he couldn’t answer a phone or send a fax, he didn’t fulfil the minimum requirement for the course. It wasn’t worth arguing that there is technology that can work around this, as they made it clear that there was no place for him there. The teacher argued that I was facilitating him to do his homework. In fact I was transcribing Laurence’s responses and putting them into full sentences, as expressive language is very time-consuming for him. His responses are always succinct.  When the teacher asked him questions, she conceded that he understood the topic. But they wouldn’t let him finish the course or be accredited for it and sometimes the class was moved into another room without inviting him to participate. It was a big shock after reading all the vision statements they had on accommodating disability!

The researcher gets a strong sense of this family’s resilience. Despite being confronted by obstructions associated with Laurence’s disability, the family are determined to keep on experimenting with different aspects of further education.

Ingrid comments that Laurence is still adjusting to university and although his comprehension is good, his poor reading skills make this challenging. He was doing a topic on short stories and they were asked to read.  Unfortunately, they were not available in an electronic format that he could download or listen to and he had to rely on others to read them to him. The following semester however, his mother was able to buy one book from Amazon and download it onto an iPad to be read out with Voice Over; another one was available as an audio book on CD.

Laurence suggests he doesn’t need support to write short stories. He has uploaded three stories to Amazon as Kindle eBooks and is currently working on another story. He indicates that sometimes he gets ‘writers block’ and reminds us “just as other people do”. Laurence believes that going to university and hearing stories of famous writers has helped him in his composition, which he does using Minspeak and word prediction on his Accent voice output device.

The importance of people in Laurence’s life

Ingrid explains: “We’ve had a bad run with one of the agencies, so we’ve changed agencies recently and we’re hoping for better things.  We had a whole series of maybe four or five support workers leaving the agency within weeks of starting with Laurence - unrelated, we were assured- which is very disheartening.

Goals for the future

Laurence has some clear goals for the future: “I would like to get married. I would like to meet a girl some time to spend my life with. I used to have a girlfriend.”

Ingrid adds: “Like so many young men in his situation, it is Laurence’s overwhelming wish to meet a girl. There is a real hole in his life around socialising with other young people.” When exploring the option of being involved with other young people, Laurence is visibly excited about the prospect. “Laurence would just like to have a group of people that he could hang out with. Finding the right peer group is difficult, as there is so little out there for people whose main challenge is a significant physical disability and who are unable to find paid employment.”

Ingrid reports that Laurence has had two mentoring jobs; one through JFA Purple Orange, which was with a young boy who uses eye gaze, and another one in which he actually got paid to go into a special unit of a school.

Laurence adds that he would like to speak to new mentors about his experience of mentoring. Laurence was involved in a series of workshops at JFA Purple Orange aimed at training other young people to be mentors.

Laurence likes writing stories. He also likes watching motor sport, motor bikes the V8 Supercars and Grand Prix Formula 1. He particularly likes Danielle Ricardo. He enjoys sailing with his Dad. Recently he has been learning to sail a 2.3 dingy solo. Laurence has a recumbent trike which he is always keen to ride. Two or three times a week, he does a workout at the gym and swims at least once a week.  Occasionally he meets up with his friends to go bowling.

When asked about what suggestions he would make to someone in a similar position Laurence responds: "Look on the bright side and do things that you need to do. My advice to others is to make the most of it. "

Researcher: “I’m amazed by you.  I was the first time I met you when you came to the workshop.  I just wanted to get to know you.  I could see you were pretty amazing.  Do you feel amazing?”

Laurence responds with a gentle “No”.

When asked what he is proud about, Laurence says, “My story being a Kindle  eBook”.

Ingrid commented that he was asking her if she had brought a card.  She had one of his latest business cards with him. (Ingrid handed the researcher an attractive card promoting a new book called ‘My First Year Out’. There is a picture of Laurence with some of his friends in New York. His Mum explains, “Laurence wanted to tell other people who are leaving school what he did in his first year out.”)

Laurence laughs when the researcher talks about the places he has visited internationally and replies, “I liked India” (Laurence’s first book is about his experiences in India). Ingrid adds that she knows he’d like to go back one day.

Ingrid says the book that Laurence wrote about his experience of India is already on Amazon. It is called Once upon a time in India and can be accessed at: http://www.amazon.com/Once-Upon-Time-In-India-ebook/dp/B008E3TLQO

Ingrid tells us that Laurence is working on another book at the moment, but it is at a standstill because he is not sure about how to go on with it. It’s called “The Angry Bull”. It’s a story about someone who has a lot of anger issues which Laurence is experiencing himself more and more. So, he’s trying to work his way through that by writing about it. He’s just not sure how to resolve the story, not sure where it goes next.

Laurence has been to a psychologist about these anger issues, and the psychologist agreed that we have a right to be angry sometimes, especially in situations where we feel left in the lurch. But the psychologist also said at some point we need to change our focus.  Ingrid admits that the main challenge is to find ways for Laurence to look forward, not back. Laurence indicated that the sessions have been helpful to him.

Ingrid comments on the loneliness that is common among young people living with disability because there are few opportunities to socialise, partly because of the logistics of getting people who rely on support workers to get together. Many of his friends and acquaintances are not really free agents. There’s no centre or meeting place where young people can meet other young people. Laurence is nodding to indicate that he agrees.

Laurence indicates that he has friends he communicates with on Facebook. Ingrid agrees that he receives a lot of support from the Facebook community. In a few weeks, Laurence will be staying at a respite centre on a hobby farm with a friend from school. He looks forward to being with other young people and has the Julia Farr Youth meetings clearly marked on his calendar. He sometimes asks his Mum and Dad what the future holds for him, which is a question that preoccupies them too.

© Laurence Byrne 2015 Except as provided by the Copyright Act 1968, no part of this publication may be reproduced, stored in a retrieval system or transmitted in any form or by any means without the prior written permission of the author.