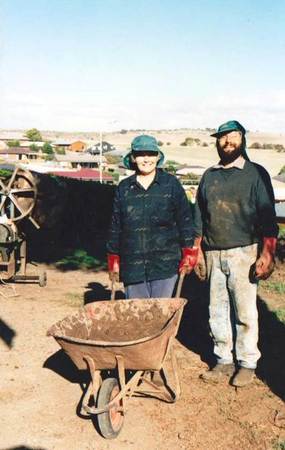 David and his mother Brenda told David’s story to a researcher.

David acquired brain injury while collecting stones for a friend's garden. A rock fell, hitting him on the head.

Early in his recovery David and Brenda identified that he would need a project to create some structure in his life. This realisation was a result of a community workshop that they attended.  Brenda had the idea of building a mud brick house, and this soon became David’s passion.  In 1992 David started building the house which would become his home.

David now lives in the house which is situated next to Brenda's home. This has been a good arrangement because when David is unsure about something he can easily access Brenda for assistance.  David has some vision impairment as a result of the brain injury; however he chooses to manage this without fuss.  He does not consider himself to have a disability.

There were lots of other people who helped build David’s house. David wanted to use salvaged wood as a feature of the house, so he and Brenda restored a lot of the wood themselves.  Brenda did most of the researching for building materials, much of which came from a local demolition yard. Knowing people in the community was also helpful.

It took nine years to build the house and David says it was a “labour of love and hard work”.  Recently, David has added solar panels consistent with his strong interest in conservation.

David has a complex compost making system of which he is very proud. He is a keen gardener and keeps busy with projects developed for Brenda’s garden.  This has included paving areas using particular designs and building a pool and rockery.

He also built an extensive cubby house for his granddaughter and grandson. David refers to his daughter when asked about his proudest achievement.  His daughter has a partner and they have two children, one of which is a baby, and he maintains regular contact with them.  David is proud of the wooden toys he has made his grandchildren.

David is proud of having built his own home.  He is aware of the benefits of owning your own house instead of renting.  It is a huge achievement which he associates with his recovery and getting his life back on track.

David’s other interests include playing the piano, cooking and art. He has painted many pictures and works with friends Kitty and Ian who are also artists. Keeping fit at the local gym is also a keen interest for David.

A very social person, David enjoys cooking for and entertaining family and friends.  He maintains contact with two best mates from school days, Les and Steven.

David has achieved a lot since sustaining a brain injury.  Setting goals has been important in his recovery.  He says that it takes determination and hard work but the end result is worth it.

David also says that a willingness to work hard and having staying power—even when you are not certain you are doing the right thing—was necessary for achieving his goal. He places a lot of importance on personality in determining whether or not a person is motivated to undertake a big goal such as building a house.

Brenda says it also requires connection with the right service who can give you the information you need at the time when you need it.  A local service agency has been fantastic in the support they have provided along the way.

Information needs often change as health needs and abilities change.  In David’s experience, he and Brenda did not know what to do when they first set out to build a house and had no idea who to ask.

Brenda researched how to build a mud brick home and service providers supported them both during this time. David advises others in a similar situation to be determined to get what you want.  He says to go get information about what you want to do and do it.

© David Oakey and Brenda Oakey 2011. Except as provided by the Copyright Act 1968, no part of this publication may be reproduced, stored in a retrieval system or transmitted in any form or by any means without the prior written permission of the author.

David presents at conferences about his own perspective on the most useful approach to living with a disability. In 2011 David and Brenda travelled to New Zealand to conduct a conference presentation there.