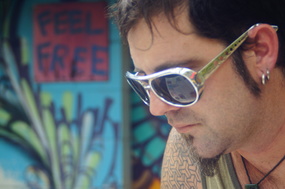 Jeremy told his story during a recorded conversation between the researcher and himself. This story is based on a transcript of that conversation.

I undertook a visual arts degree in northern New South Wales. According to my mother I have always been an artist, even as a small child. I worked in community arts with people living with disability and moved down to Melbourne to work with children and various groups doing art.

At the age of 35 I experienced a workplace accident which resulted in a serious operation on my spine and neck. This revealed I had a degenerative spinal condition called Acute Spondylosis with a lot of complications. Since then, I’ve had another two operations on my spine and it has resulted in Complex Regional Pain Syndrome. I haven’t been able to work full time since. I lost the ability to continue with the art practice I'd been doing for many years and had to start again.

I’ve lost most of the movement and strength in my right arm (I’m right-handed). I’ve been in and out of hospital and on pain killers for seven years now.  I had further complications about two years ago and things were progressing quite badly. I just wasn’t getting better and I had a series of further tests. The result was a label known as Parkinsonism’s symptomatic of Parkinson’s. Here I am now 42 years of age, which is quite young to be getting Parkinsons.

It’s had a huge impact on my life and I struggle with it. I have periods where I just can’t believe it, and at times I’m very angry about it.  But, in the first few years, it was just devastating, my whole world turned upside down. I really didn’t know who I was anymore.  Everything I used to do was very much defined by my physicality. I got very depressed and became very isolated. A lot of my friends really didn’t know how to react and how to handle the situation. I understand from others it is a very common thing to happen. It’s almost like a second trauma and can lead to reactive depression. You become depressed and you become angry then you’re not pleasant to be around. No one wants to be around you. I began to spiral downward and it became a very difficult couple of years for me.

What is it that has enabled me to move forward? I think I have a very dark sense of humour and that’s been helpful. I think being able to pick up my art practice was really helpful too. I had to completely change the way I viewed the world. As an artist that was quite interesting! I had to find a whole new way to try and express how I was feeling. On an intellectual level it was interesting but emotionally, really depressing. It was a very productive period but very sad. I don’t like to look at the work I did then because it’s very painful. I destroyed a lot of it.

There are few people who stuck by me and they were just incredible. I feel as if they saved my life. I lost 90 per cent of the people in my life, but the people who did stay are just so close and dear and special to me now. Their unconditional support and their belief in me was critical.  Even if I was acting out and if I was angry, they kind of knew that it wasn’t really me, that it was my reaction to the illness and my reaction to the circumstances. They knew the “real me” was still there, and they believed that I would find a “silver lining” or the “pot of gold” at the end of this particularly dark rainbow.

After four years I start to make connections with other people living with disability. I started to do volunteer work, at an arts/disability organisation. I was caught up in the absolute nightmare that WorkCover can be. I was desperately poor. I needed to keep active. I wanted to start to do some work and I knew I could never work full time again. In Victoria, we’ve got this marvelous organisation called Access Art Victoria and so I started volunteering there. I met incredible people, some of them worse off than me. They had extraordinary stories and they were not just surviving, but thriving. Through this experience I realised there was a community out there, a powerful community and that was a real turning point for me. I gained a sense of belonging. Sure, I had a disability, but still belonged to a vibrant, strong, powerful community.

I am very inspired about the future. While both my conditions are degenerative and I have had a turn for the worse this year, I have never felt more inspired. In spite of my disability I’m feeling more and more optimistic.

There are so many incredible people, and there’s so much to do. I feel like my life really did begin at 40. It’s like hitting the beginnings of middle age and I’ve found my life purpose, my community and my people. I want to do everything I can to facilitate and assist in whatever way I can, but definitely through the arts to help people have a voice. I have quite a few good friends who are artists or performers living with hearing loss, and they have such a strong community and culture. A lot of them say, “If you could give me hearing tomorrow, I would say no because this (hearing impairment community) is our culture.”

I want to help people to express their stories and experiences through art. So often we are pushed to the margins of society, particularly with the political climate and all these discussions around disability and the NDIS. I think it’s more and more important that people realise how many people experience disability and that not everyone who has a disability is in a wheelchair or that their disability is visible.

In terms of strong influences in my life the place where I work, Art Access Victoria has been incredibly supportive. There are lots of art/disability organisations around Australia. I continue to see support and funding related to the arts. I am also a Judge for the “Connected” exhibition, the-largest disability arts exhibition in Victoria. Against all doctors’ advice I’m working one to two days a week and doing freelance work because I just can’t stand the boredom of doing nothing and I’ve got too much I want to do.

I’m an avid reader and someone’s put me on to what they call “crip theory” (McRuer, 2006) which takes the view that it’s society that really makes us disabled. If they took away the barriers people living with disability face in society, they could be included in 100 per cent of society.  When you read the facts and figures you realise that we are not doing so well with disability support in Australia.

I identify as queer and I suppose the experience has given a sense of what it is to be marginalised and to be the “other”. The whole issue of sexuality and disability is quite fraught particularly with intellectual disability. At forums or conferences I always bring up the issue and I watch people flinch and it quite surprises me. I asked myself why is this? These are two marginalised groups. What’s the shock about when they’re put together because they’re always going to be.  I think the figure is one in ten people identify as gay but one in five people experience disability so of course there’s going to be cross-over. People living with disability are bound to feel they may not fit into gay culture.

I’ve had a couple of long-term relationships which unfortunately have been impacted by my health issues. I continue to be hopeful that I will develop a meaningful relationship and in the meantime life goes on.

© Jeremy 2014. Except as provided by the Copyright Act 1968, no part of this publication may be reproduced, stored in a retrieval system or transmitted in any form or by any means without the prior written permission of the publisher.