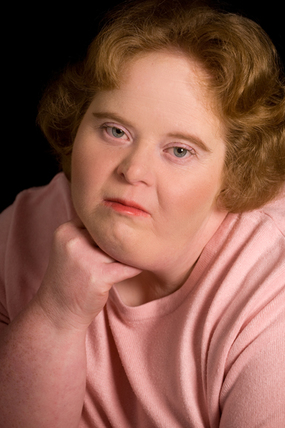 Rachel told her story in a recorded interview. This is the transcript.

Under the moonlight where the winds blow
The birds in the trees sing out to me
I gently touch the only life I know
Mark my words, hold my hand
Nothing is broken
Nothing is wrong

I am a woman who lives with Down Syndrome. I was born in London in 1977 and came to Australia when I was a year old. I lived in Port Augusta for 28 years where I went to mainstream schools.  The schools I went to were excellent—very good—and I was a member of the Student Council in High School.

I now rent a little unit. Mum and Dad live next door. Mum and Dad are very supportive. I put a lot of my achievements down to the support of my Mum and Dad, and to mentors. My mother has helped me a lot. Ever since I was a baby, she made sure that I could actually eat, or walk, or run.

I’m studying to be four different things.   Actor definitely, film-maker (I’m interested in film), creative writing (I’m a writer as well) and a dancer. I love writing. I got top 10 in my English class just by doing poetry.  When I have goals I discuss it with my mentors, and see if it’s possible, and go from there.  Mentors have been a big thing in my life.

I figured that I could dance when I was quite young, at six. I used to dance a lot in high school, and do a lot of drama work.  It was when Restless Dance Company came to my school, in Port Augusta, that many more new things began to happen in my life.

Restless also did a workshop at the school which I was involved in. Sally Chance of Restless was the director at the time, so I had an opportunity to learn about the company and soon was going to Adelaide every week for rehearsals. I was in Restless Dance Company for 8 years and was in many shows with them. The first time I had been away from home was when I went to Darwin on tour with them.

Through my school years I was doing the Duke of Edinburgh Award Scheme and when I gained my Gold Award it was suggested by the director that I considered applying for the Up The Hill Project at Flinders University. This project takes people with intellectual disabilities on a special three year course where they can audit many different subjects. I had never thought of going to a University so it was all very exciting for me.

In the Up the Hill course there were mentors who knew how to help me to get used to being at university. They were a positive influence in me learning how to work and make friends. It helped me a lot towards understanding what I wanted to achieve.

I was asked by Up the Hill to attend the World Downs Syndrome conference in Dublin, Ireland, and to present a paper on my experience of being on the program. This was a bit scary but I found my strength to speak.

One of the subjects I audited was Screen Studies, and it was after I had graduated from Up the Hill that the lecturer Cole Larsen asked me to make one of my scripts into a film. I worked with him and the students from the University to direct the film called Brown the Dirt.

It is a 22 minute children’s film about Australian animals. It was very special because many of my actor friends offered to play the parts for me. Filmmaking is only one interest, and I’m hoping to grow from there.  I have also had the opportunity to be in some other films.

The first one was as an extra in One Night the Moon. It was a very small part but it was great to be with all the crew filming in the outback near Hawker. The next was a digital film made with Restless and The Australian Dance Theatre called Transcriptions.

In 2009 I was the lead actor in a short film called Work-Ready.  It was made by Performing Arts Students from TAFE for the Shorts Film Award. It talks about how limited jobs are for people with disabilities. I was nominated in this as a best performer for the category. I would like to do a feature film, or television series, or whatever.  I know I have to work hard for this but that’s a goal.

Being part of many different groups has helped me to achieve. I am in a service group with people with disabilities. It’s through Kiwanis and it’s called the Aktion Group. They meet each month and we make trauma dolls for the children who are having trauma in hospitals or any where. Aktion raises money and helps communities who have experienced disadvantage. It also collects gifts for people at Christmas time and helps with the Australia Day Breakfast.

I also have a lot of fun belonging to Club Slick which is run by the Downs Syndrome Society. Here we do Rock and Roll, and I am now a volunteer helper there. I was happy to be asked to join the Rock and Roll demonstration team. My first time was to dance at the Dublin congress, and we are asked to dance at different events in Adelaide.

Being a part of groups has helped me to develop confidence and social skills.  I have also gained a lot of confidence from my performing life.  I was fortunate in getting a mentorship grant to go to London for three months to work with a company called AMICI Dance Theatre with a director called Wolfgang Stange.  This is when I started to learn about using dance and drama to work with day options groups, and also performed with the company at the Lyric Theatre Hammersmith in London.

The second with London based artist Julie McNamara performed in Adelaide in the Feast Festival in a show called Steak and Chelsea, then I went to London and performed it with her again. Julie came back to Australia last year to include me in a documentary being made about mentoring three people in different part of the world.

I performed in the Burlesque Hour with Emma J Hawkins, Maude Davey and Moira Finucane for the Adelaide Feast Festival in November 2010. In 2011 I was awarded a grant by The Richard Llewellyn Disability Arts Trust to continue my training for working as a team teacher in groups.

Sally Chance became my mentor. I am one of her past students in Restless. My goals in life are to work towards my career and see where it goes from there.  I have a goal to be a team teacher in dance/drama.

There's a group that I have worked with called Tutti Kids and I help teach children to be involved in dance/drama. They are children who are learning to be sociable in the world.  Dance gives you the ability to be stimulated and drama gives you ideas and stretches your imagination.

This is exactly what we’re doing with the children to free up their movements and these are children with all types of disabilities. I am helping to teach them how to move, teaching them how to use their muscles and their joints, and use their feet. Sally and I have been working together for over a year in different groups.

These kids are from Tutti Kids, Restless Dance Theatre, Urban Myth and Clapham Primary School. We are now thinking about developing a package for groups based on my film Brown the Dirt. We are hoping we can take this to more primary schools and to day option groups.

Last year I was encouraged to do the Foundation Course for Flinders University. I had to work very hard. At University one of my hardest subjects was Maths. I’ve never been good at Maths.  I coped with the creative writing because I know how to do that. I submitted a bit of poetry to the lecturer at the time.

I can remember one that I wrote which symbolised disability.  It goes something like this:

Under the moonlight where the winds blow

The birds in the trees sing out to me

I gently touch the only life I know

Mark my words, hold my hand

I’m a people person. I enjoy being with lots of people doing different things. I’m also an animal lover as well. I’ve got fish now. When I was younger I had loads of animals around me. I had a whole aviary of all different types of birds.  I had two big black Labradors named Polly and Meg.

I had three Burmese cats.  They were three different colors.  Lucy was grey, Kimba was dark brown; she was my favorite, and my first word was part of her name. That was “ba”. The other one was cream. Mum called her Syllabub because her colour reminded her of a traditional English desert.  I had a rabbit as well called Reggie.

I am now busy with some more new things in my life; I managed to get enough marks to pass the Foundation Course for Flinders University so I am going to study for a Bachelor of Arts starting in 2012.  Restless has invited me back to be in a show called Howling like a Wolf and I am also in a Country Arts group called Under My Feet which meets in Port Elliot. We work with movement music and film.  Another new and exciting activity for this year has been being selected to be one of 200 across Australia for the Leaders of Tomorrow Program. One of my aims is to improve my public speaking skills.

I am proud of being who I am. I am a listener. I listen to people’s problems. I did it when I was in school and I found out I’ve got a bit of a counselor attitude towards life. For example, I supported a friend who was having issues about how to attract a guy. I supported her by suggesting to her ways that she might get to know him better.

I know I have had a lot of opportunities in my life. My parents and mentors have introduced me to lots of different activities. These experiences have taught me so many things and I have had a lot of fun.  I would say to other people in similar situations: “You’re still a gorgeous person; live life to the fullest. You can move on however you want, as long as you’re healthy and happy, wherever you are.”

This is a message I’ve grown up around. And so, believe in yourself; don’t limit yourself by thinking that you’re not as good as the next person. There are so many things to do all around so have fun trying something new when you can.

© Rachel High 2011. Except as provided by the Copyright Act 1968, no part of this publication may be reproduced, stored in a retrieval system or transmitted in any form or by any means without the prior written permission of Rachel High.