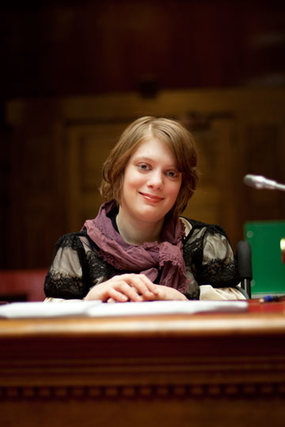 Kelly told her story in a recorded interview.  This is the transcript.

I have spastic cerebral palsy that has affected both legs and my left arm. I was born three months premature, the size of a tissue box, weighing about 770 grams.

Until recently, I was the smallest baby born at the Flinders Medical Centre. I think I’ve been outdone since then—I think that there’s been one baby that was the length of a ballpoint pen.

For a long time, even though I used the label “having a disability”, I don’t think I really identified as being disabled until I was about 18, because I had all of those normal experiences.

The one experience I can pin it down to, was when I was working on a theatre project with No Strings Attached Disability. This was a project where an emerging artist was paired up with a professional artist to make her a place-getter.

I was obviously an emerging artist, and I was paired up with a professional, and we were doing a rehearsal where everybody got to join in and give feedback.  Somebody made the comment about how I needed to work a lot harder at being a better artist because of my disability. This person didn’t feel that I was on equal basis as an artist with this other person due to my disability, and I needed to be acutely aware of that and work a lot harder than the average person.

I remember bursting into tears, and this person said, “Oh, I’m sorry, I didn’t mean that you weren’t good,” and I said, “No, it wasn’t that you said I wasn’t good, it was that you said I was disabled.” Up until then, it had never occurred to me that that label had been a problem for me.

I think that it was really kindly meant.  I guess before coming into politics when I was  writing and performing, quite often people would be amazed that I’d written or performed what I had, as a person with a disability—that they were enjoying it as a piece of art.

There was always this kind of fascination with the fact that it was written by an artist with a disability. People expect a lower standard, so you do have to fight really hard against those perceptions.

I guess it was hard realizing that, but at the same time I think it was a blessing in disguise, because I think it planted a bit of a fire in my belly so to speak. It really pushed me to work harder, to want to become a better writer and a better person because of that.

So I think it made me stronger. I think that if I hadn’t been blessed with being born with a lot of passion and a lot of strength, and being witty when I need to be and being able to stick up for myself, then I would have just crawled in a hole a long time ago.

I remember one time in high school when we were having a group assembly, one of the teachers said, “Can everybody just move out of the way while we get the wheelchair out?” And about three students simultaneously said, “Her name isn’t wheelchair; her name is Kelly.”

And that’s when I really realized, that’s what made me stand out if you like—being smart and being witty, and so maybe on a subconscious level, I’ve always felt like you have to work really hard at being smart and witty and funny and charismatic because otherwise you are just the kid in the wheelchair.

So, I think, on a subconscious level, that’s probably with me all the time. It is probably a blessing in disguise, because I like being who I am, and I like that I’m strong and I can be articulate and funny, and stick up for myself when I want to or need to, and maybe if I hadn’t had these experiences I wouldn’t have discovered those qualities.

I wouldn’t know what life was like if I weren’t in a wheelchair, but I figure that parts of it have made me who I am, and I like that person. So, you’ve just got to take the crunchy with the smooth.

I am a positive person. There have been times in my life that have been really hard. When I was 17 I was diagnosed with clinical depression and I went through that for about two or three years, and I guess I just came out of that deciding that I was going to do everything I possibly could to be happy. Being sad for such a long time, at such a young age, makes you realize that there’s so much more to life.

I’m blessed to have a lot of passion for a lot of things, and because of that I want to do different things, and more things all the time.  I guess, particularly doing the work that I do now, being negative wouldn’t really get me anywhere.

You easily get weighed down if you have to put up with hearing these stories that I hear every day, and the things you read in the newspaper, and the kind of hardships of other people and yourself that you have to deal with. If you didn’t have some positivity to hang on to, it would destroy you pretty quickly, and then you couldn’t really do your job effectively.

Where did that positivity come from? I think it’s kind of a mixture of nature versus nurture.  I’ve known since I was born that I was tough because I’ve had to overcome a few hurdles by being born so premature, and I have a little thing I tell myself about the meaning of my name—Kelly Leah.  Kelly means ‘Warrior Princess’ and Leah means ‘Delicate’, so my name kind of a mixture of both, like a ‘Gentle Warrior Princess’.

And so sometimes I hang onto that when I need something. But I think I’m blessed with being able to find happiness in a lot of different things in life, and that really holds me in good stead.

I have things that I’m more passionate about, things that are my main passions, but because I have a lot of different things that bring me joy, I don’t necessarily hang onto one thing. So if I lose that thing, it’s not like everything is gone.

Mum would always tell me, “There’s nothing you can’t do,” and I remember one time in high school, when they were organising a trip to Europe, I came home and said to Mum (because I really loved French then), “Oh, I’d love to go to France and practice French, but do you think I can (because obviously it’s going to be harder)?”

And she said, “Well, of course you can, and I just happen to have a thousand dollars that I put away when you were born, because I knew that life was going to be harder for you. It’s accumulated in interest, and is now about $10,000, so you can go to Europe.”

Mum just always kind of looked out for me, but in a way that would let me fight my own battles. So she’s very good at knowing when she’s to step off and let me be me. So I think she’s probably the main person that’s ingrained that in me.

I think my positivity is just intrinsic, but it’s also environmental.  When you look at the disability community, which I identify as being part of, and I have a lot of people whom I love within that community, and then you have this opportunity fall on your shoulders to possibly help those people…

I don’t want to sound cliché or narcissistic or anything like that, but I don’t really feel like I have a choice.  I felt like, “Here’s something that we’ve been waiting for so long, and it may never come again, and this incredible opportunity has fallen on me, and  let alone be it in the saddest of circumstances, this may never happen again—let’s give it a shot!”

Kelly won her place as the leader of the Dignity for Disability Party after the party's lead candidate Paul Collier died suddenly during the South Australian election campaign in March 2010.

What am I proud of?

I’m proud that everything I do, even though people may or may not agree with me all the time, I do because deep down in my heart I believe that it’s the right thing to do.

And I’m proud that I’m capable of following my own dreams and my own path, which is a lot harder to do than following someone else’s dreams for you.

I’m proud that I’ve been in politics for a year, and haven’t gone totally mad yet.

I guess I’m just proud to be me.

I have achieved tackling a very hard job, with very little experience, to the best of my ability, and doing it with all of my heart, and hoping that it’s the right thing to do.

I’ve already achieved some small changes and I look forward to achieving more and bettering the lives of the people who I care about so much, and therefore bettering the world, I hope, piece by piece.

From what I’ve experienced in life, the purpose of life is to be happy, and I think that we all have that built into us, but we come across environmental factors.

Things will evolve which we’ll try to change, and perhaps the broad disabilities are more likely to be tainted because they do have to face different challenges that people without disabilities don’t have to face, and they are difficult things for people to relate to, and it can be very isolating.

But, I think a big part of it has to do with the way that a lot of people still look at disability—as there being something wrong with the person, or something that’s gone wrong, or something that’s changed, or not gone as expected. A few years ago, I heard someone say, “The perfect answer to the question that a lot of people with disabilities get asked—‘What happened to you?’—is ‘I happened’”.

Usually, when someone asked me that question, I’d say, “Well I had cerebral palsy, and then I had this operation, and then this happened and this happened,” but when I just said, “I happened”, from that moment on it was what Oprah Winfrey calls an “Aha! moment”.

I think that maybe people just lack that understanding that we’re all happening to ourselves, and it doesn’t matter if we’re in a wheelchair or not, or blind or not, or deaf or not; we’re still ‘us’ and I think it’s just a matter of not losing ourselves amongst all that kind of weighty stuff that will try to cloud us!

I also think that we all have the ability to become well-placed to do that, to see the world that way, and it’s just a matter of finding a way.

For more information about the Dignity for Disability Party visit their website at d4d.org.au or email d4dparty@gmail.com.

© Kelly Vincent 2011. Except as provided by the Copyright Act 1968, no part of this publication may be reproduced, stored in a retrieval system or transmitted in any form or by any means without the prior written permission of the author.